Here we are at the tail end of January already.  Seems like the weeks just fly by!  We’re really into Winter now and experienced a “January thaw” a couple of times.  Our world outside has been white since – what? – November.   This morning it snowed for a couple of hours and now the winds have kicked in and powdery snow is blowing.

Still, it is somewhat amazing to live where everything is white outside for … months.

Questions I Get from Friends in Southern Climes

Are you staying warm?   You betcha, indoors and out.  Structures are built differently here, as is outerwear.  Furnace thermostat is set at 70, and we stay comfortable.  We have appropriate outerwear – parkas, boots and cleats for them when needed on the ice, and warm hats and gloves.

Are you snowed in?    Several friends I’ve talked with ask if we’re buried in snow, snowed in, and so forth.  Nope.  There’s way less than a foot on the ground, maybe 6 inches.  Maybe.  When it does snow up here, the flakes are so fine … think flour falling from the sky and lying on the ground.  Really light and powdery.  Takes a lot  of “flour” to build up to any accumulation of note.  It’s also often just too cold to snow up here.  Technically, that’s not true, but … well … it sort of is, too.   Let’s just say that when it’s –35 F out, you’re probably not going to get snow.

Aren’t you going crazy or getting depressed?   Nope.  Nada.  We did purchase an exercise bike, since Dave’s not cycling and I’m not walking – both outdoor activities.  We’re both very happy to be back Up North and sure glad we made the leap!

Is this it?  Is this where you plan to stay?   Had another friend ask recently if this is “it,” where we plan to be.  Yep.  This is it.  Even if we did move from this specific spot, we’d still stay up here.  No plans – or urge – to relocate.  We have traveled quite a lot, both individually and together.  While I bet there will be road trips around the state and perhaps even out-of-state, I think it’s safe to say we’ve gotten the “hitch itch” out of our systems.  We certainly have no plans to travel back to Scotland.  We’re done flying.

We’ve talked about “escaping” to a cabin for a few days at some point.  Have a campfire again and a wee holiday.  That should be doable at some point in the not too distant future.  We sure won’t have to travel very far, as those types of accommodations are plentiful up here.

You were smart … One friend said we were smart to move “where no one wants to go.”  Yep.  I think so, too.

Sure do like our town and the life we have carved out for ourselves here.  Sometimes on our days off we just hang out at home – like this weekend – and watch the snow fall.  I’ll cook a bit, Dave’s been tinkering with his bikes, we may get in a game of chess later.  Other weekends we explore the town a bit, prowl a bookshop or two, or perhaps take a wee drive.  Of course, when it’s not Winter, we’re out cycling, walking, hanging on the patio, and out-and-about around town.  Or not.  Ha!

Looking out at ice houses on Lake Bemidji

Snapped the above photo when out running errands last week.  There are usually a bunch of ice houses on the lake, and there was an ice fishing tournament coming up the next weekend.  What’s an ice house?  Check out this dealer’s web page.  Some of them are just about as nice as a regular travel trailer! 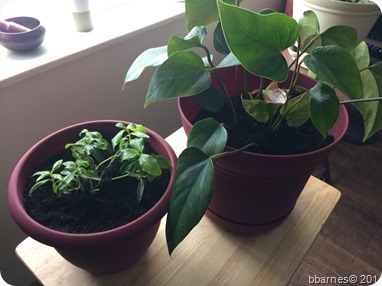 These two have been growing, so they got new “homes” last weekend.

I still read RV blogs, most of which I started following and/or reading years ago.  One I’ve tapped into recently is Travel with Kevin and Ruth.  They are currently serving as wagon masters for an RV caravan touring Mexico.  There are so many RVers who venture south of the border, some for short visits and others for seasons at a time – or permanently.  I applaud Kevin and Ruth not only for taking on the trip and responsibility, but for telling it like it is!  It certainly sounds like an adventure!

Bemidji was named Best Town in Minnesota for 2017, by Minnesota Monthly.  Not don’t ya’ll all get the idea about moving here!

Well, that’s it for today.  I think I’ve rambled on enough.  I really should keep a notebook handy for the blog ideas that pop into my head at random times.  I’ll try to start doing that …

Thanks for stopping by!  Stay safe out there, okay?

A First for Me Today

It was a bit warmer today at around 5 F and sunny at times.  We ventured out to L&M Fleet Supply for new headgear for Dave.  He walks to and from work – just under 10 minutes – and could use some new gear truly designed for this climate.  I have taken him in the car when the weather’s been really nasty, but I think he enjoys the walk when it’s doable. 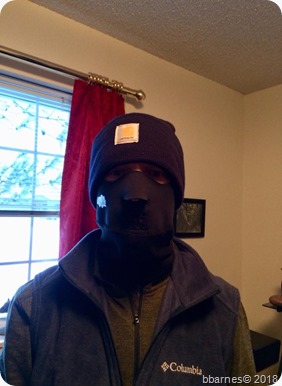 He’s starting to take on the appearance of The Invisible Man just a wee bit, eh?

Our first stop actually was the recycle station not far from home.  We had a couple of boxes to “donate.”  One was from a new ceramic heater.  We use a couple of those in different rooms to supplement the gas floor heat now and then.  The other was from … 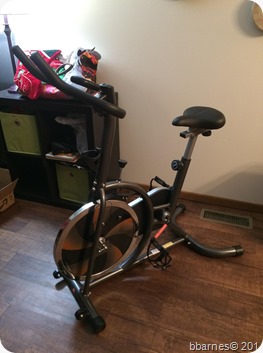 Half of our living room looks more like a bike shop/workout area.  Ha!  Good thing we aren’t wanting a dining table, as the bikes and this piece of equipment are where a table would be.  Unconventional, but it works for us.

Now that Winter has settled in for real, Dave obviously isn’t getting any bike time on the roads (or anywhere else, for that matter)  and I’m not getting my walking.  We initially talked about joining a gym for the winter months – him for the cycle/spinning equipment and me for walking equipment - but this makes much more sense and is less expensive than a membership.  At least we can keep the blood flowing and retain some sanity during these really cold months.  This way we don’t have to pile on coats and gloves, drive someplace, change into workout gear, use public equipment, pile on coats and gloves again … you get the idea.  Again, it’s waaaay less than a membership would have been for both of us.

After those two errands were done and dusted, we decided to drive down to the lake and take a look.  Ended up at one of the various parks in town, and ended up doing this … 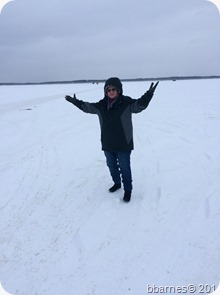 Me on Lake Bemidji 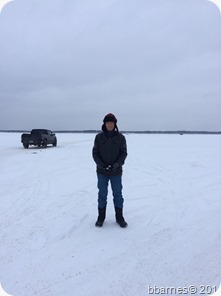 Dave on the lake.  Note the truck cruising along in the background!

That was my first time to walk on a lake.  Now I can say I’ve done it.  Guess we’re adapting to and embracing living back #UpNorth.

Oh!  Yes, it’s been incredibly cold, even for up here.  Bemidji now has a hashtag - #brrrmidji.  Ha!

So our wee outing today was fun!  It’s so easy to just stay indoors and at home when it’s cold out but, you know what?  Life goes on up here and one just needs to get out and about when it’s safe to do so.  Errands still have to be run, and there’s some silly fun to be had around town and the area during Winter.

This sure as heck beats sweating and being miserable in warmer climes, and we’re happy and grateful that we’re back up in the #MinnesotaNorthwoods #UpNorth and #brrrmidji.

Thanks for stopping by!  Stay safe and warm out there, okay? 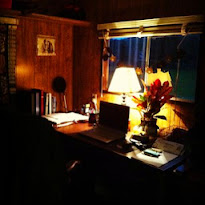